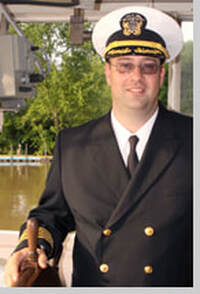 The Valley Gem is truly a thing of beauty. It is meticulously maintained and offers you the opportunity to sit back, relax, close your eyes and feel the wind on your face and hear the rush of the water. It's an experience that is difficult to duplicate.

The Valley Gem has a rich and wonderful history. The current boat was built by the Sands family in 1989 and is currently owned and operated by Captain Jason (J.J.) Sands, son of Captain James E. and Peggy Sands and his wife Captain Heather Sands.

Captain J.J. Sands grew up on the river and with the Valley Gem. In 1992, at the age of 18, he became one of the youngest people to ever receive their pilot's license. In addition he is also an A.S.E. Certified Diesel Engine Mechanic, received his Bachelor's Degree in Business Management from Marietta College, and has recieved his Servsafe food protection management certificate. He has extensive knowledge of the rivers and their history and offers a unique perspective on their environmental and economical impact. Captain J.J. has been captain of the boat for over 28 years and shares this family tradition with his children, Andy, Lily and Zoe.

Captain Don Sandford took his first trip on the Valley Gem in 1974. He brought his Donald Duck fishing pole with him and asked Captain Sands for permission to fish off the boat. Don began working for the boat in 1985, while attending Ohio University. He earned his pilot's license in 1989, and installed the electrical system on the current Valley Gem. Since then, he has navigated the boat up and down the river thousands of times. A keen observer, Captain Don can always tell you what is new on the river. He is happy to have visitors in the pilot house and share stories about the river. Don and his wife have one daughter, Mattie.

Captain Heather Sands came on board in 2010 with the intent to redesign the marketing plan for the business. Since then she has taken on many roles, running the office and being the main point of contact for most trips. Heather has a Bachelor of Fine Arts in Photography and Computer Digital Imaging and has streamlined the reservation system and marketing program. After working with the company for nine years, she earned her pilot's license in 2019.

Our History...
All of us like to dream about what we would like to do with our lives, but few of us have the determination to carry our dreams to completion. Captain James E. Sands, Sr., and his wife Peggy were an exception to the rule. After much personal sacrifice, they managed to put their first 98 passenger sternwheeler into operation in 1973. With the assistance of Capt. Fred Way, they named the boat Valley Gem, after a historic packet boat that plied the Muskingum River between Marietta and Zanesville, Ohio during the previous century. It was an immediate success. For more than ten years, he and his oldest son Jimmy Sands, also a licensed pilot, brought pleasure to thousands of passengers with trips on both the Ohio and Muskingum Rivers.

Captain Sands always felt he could improve upon the design of the Valley Gem. He spent several years designing a brand new boat. With the assistance of his friends, master welder Ivan Arnold, electrictian Charles Shockey and mechanical engineer Tom Hudson, he completed the new Valley Gem Sternwheeler in 1989. It was designated the Flagship of the Muskingum Navy, with Captain Sands as Commodore. Sands specifically designed the boat for the Muskingum River. It has two decks so that it can clear the low bridges. It is not wider so that it fits in the hand-operated locks. It is a well maintained all-weather boat with a heated or air-conditioned lower deck for passenger comfort. Then, in 1990 on the day of the Sternwheel Festival Races, tragedy struck the Sands family. Jimmy, at 32 years of age, died after a prolonged illness. Captain Sands, his wife Peggy and their son J.J. carried on.

Captain James Sands passed away in 1998, after living his dream of being a riverboat captain for 25 years. He knew and loved the rivers, and enjoyed sharing river stories with the passengers. His wife Peggy retired from the business in September 2003. She handled reservations for the boat for almost thirty years. Their son, Captain J.J., and his wife, Captain Heather now continue the family tradition, and you can meet them and enjoy a wonderful trip on an authentic sternwheeler here in historic Marietta throughout the year. They look forward to seeing you and extend a heartfelt welcome aboard.